To Write Or Not To Write

It seems most would agree that to make a reputation as an influential professional historian, one must write and publish not only books, but all sorts of printed matter for public consumption.  Yesterday, at the main museum I noticed a new book in our library, Lincoln and Whitman, by William E. Barton, Clara Barton’s cousin.  Funny I thought, I was just looking through his biography of Miss Barton to find some outstanding quotes for part of the CBMSO’s exhibits, and spoke to the museum’s Director of Research about his peerless credibility as a Barton biographer.  The inside cover of Lincoln and Whitman is filled with several reviews by his peers outlining his expertise as a Lincoln scholar.

Part of my work at the museum is to develop material for all types of programming.  Naturally, my first thoughts centered on what to write and publish in regards to my research on Barton.  But a problem arises due to the amount of work already available to the public.  One may find so much varying material on Barton already that covers just about every aspect of her being as to give a fairly balanced perception of this legendary woman.  William Barton’s biography and Stephen Oates’ focus on the Civil War years (A Woman of Valor: Clara Barton and the Civil War), two favorites, leave almost no stone unturned.  While writing and designing programming material is still necessary to cover specific aspects the museum will highlight, the question still remains- what major work could be accomplished on Barton that will fascinate and inspire interested citizens as well as catch those who are blissfully unaware of the extraordinary importance of a long-gone heroine?
﻿﻿﻿﻿

First and foremost, it is disappointing that no one has compiled and published her writings.  One of my most profound delights is reading about the experiences and thoughts of a historical figure from their own words.  Barton left literally thousands of documents available so that her life might be remembered and are the basis of cousin William Barton’s biography.   She thoughtfully kept her writings and appointed friends and colleagues to a “literary committee” led by William Barton to ensure their availability as reference material.  Accomplishing this feat is now in progress.

Secondly, has Barton been remembered for her most important achievements?  I suspect, for myself, that is the foundation of any new work.  There are times when one, after realizing the effect bias has on Civil War era histories, may have concerns about missing or discarded profoundly helpful lessons overlooked in favor of casting other light.  Should not avoiding repeating past mistakes be history’s primary goal?  Or avoiding “reinventing the wheel” while people suffer?  Unfortunately, the US military did reinvent the system of emergency evacuation of wounded during the First World War because the post Civil War draw-down forgot Dr. Jonathan Letterman’s groundbreaking work.  Let us remember these important lessons for the future. 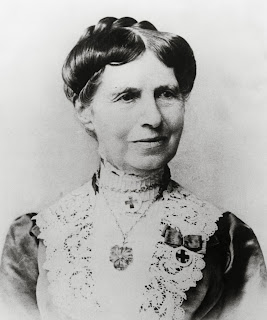 Circa 1902 at the Int. Red Cross Conference (age 80)
Courtesy of commons.wikipedia.org
Remembering Clara Barton is an important step to avoiding some of the pain and trauma that accompanies catastrophic events.  Exploring Barton’s life and experiences may inspire many great values and actions such as courage, self-reliance, determination, compassion and tolerance.
Posted in: Uncategorized