On August 22, 1856, and a 23-year-old widow knocked on the door of a newly established agency in Chicago, Illinois. Her name: Kate Warne. Her mission: Get a job. 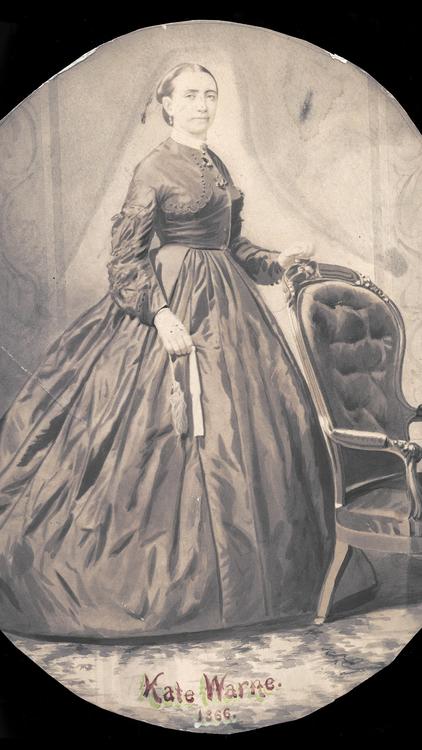 A watercolor portrait of Kate Warne, Courtesy of the Chicago History Museum

However, Warne was different. She wasn’t after a clerical, domestic, or factory job. She wanted to be an agent at the Pinkerton Detective Agency.

Pinkerton agents were part private investigators, part body guards—and all men. Allan Pinkerton established the Pinkerton Detective Agency only a year before, in 1855. The agency revolutionized the way police work was conducted in America. Pinkerton developed the idea of following and staking out a suspect, which he called “shadowing,” and working undercover, aka “assuming a role.” These are just a few of the groundbreaking techniques Pinkerton agents developed that are still used today. While Pinkerton agents were pioneers, Allan Pinkerton still wasn’t sure he was ready to hire a female detective. No police force in the country hired women—nor would they until 1891. Even then, women couldn’t become investigators until 1903.The term ‘policewoman’ isn’t coined until 1920.

But Pinkerton was different. He listened to Warne. “[Women could be] most useful in worming out secrets in many places which would be impossible for a male detective,” she argued. Warne insisted that women could befriend the wives and girlfriends, the mothers and sisters of suspected criminals and gain their confidence. She claimed that women have an eye for detail—that they are excellent observers. Pinkerton was impressed. He would later describe Kate as “graceful in her movements and self-possessed. Her features, although not what could be called handsome, were a decidedly intellectual cast. Her face was honest, which would cause one in distress instinctively to select her as a confidant.” He hired her.

Kate Warne grew to be one of Pinkerton’s best agents. Kate devoted her life to her cases. She was instrumental in preparing details for transporting President Lincoln through Baltimore. During the Civil War, she often went undercover, posing as the wife or mistress of Pinkerton’s undercover-persona and was able to penetrate different Southern societies and gain information from elite Southern women. When Pinkerton hired more female agents, he had Warne train them. Allan Pinkerton never regretted his decision to hire her, often proclaiming “She succeeded far beyond my utmost expectations. Mrs. Warne, never let me down!”

Warne worked for Pinkerton for twelve years—until her death in 1868.

Melanie Garvey will be graduating from Shepherd University in the fall with a degree in History. She is currently an intern with the National Museum of Civil War Medicine and Harpers Ferry National Historical Park.

[1] The description of women’s work in America would be incomplete without discussing how long and hard women of color had been working, many of these women without pay as slaves. This shouldn’t be perceived as a “footnote of history.” It is a major and important topic.