It All Started Here

Clara Barton’s boarding house was not the first place she opened the Missing Soldiers Office.  The first place, in fact, was an office in Annapolis, MD, where Barton first proposed to locate missing soldiers for their families at Camp Parole.  The camp, opened in June 1862, it was one of the ideal places to begin searching records and interviewing witnesses.  After Camp Parole’s closing, Barton worked from the former Custis estate, Arlington, in Virginia.  May of 1865 is the first we have on her making some rooms in “Shaw’s Settlement” (the nickname given by boarders in the space) on 7th Street in Washington the office.
Engraving of Camp Parole
Camp Parole began as a holding place for paroled prisoners waiting for their official exchange between the two belligerent governments fighting the Civil War.  Initially, the military allowed these soldiers in limbo to go home on furlough to await their formal exchange.  After a period, the War Department noticed an alarming amount of desertions among the recovering prisoners and decided to limit their movement so they were within an arm’s reach during the suspense.  Camp Parole’s function became a prison for prisoners of war from their own army.
St. John’s College in downtown Annapolis became the Camp’s first location.  There a hospital was set and tents erected as barracks, but it did not take long for the college to become overwhelmed with soldiers.  Next, Camp Parole moved to a space further from town, along the intersection of Forest Drive east of Bywater Road (now a small shopping center), and lastly 250 acres on Old Solomons Island Road (MD Rt. 2) south of West Street (MD Rt. 450) over to Chinquapin Round Road.  As the Union army gained control of more of the South, numbers necessarily increased.  While the population ebbed and flowed, the military built the camp to hold up to 10,000 men.  Barton described her situation as receiving an office with some assistants and supplies.  Her main source for information came from prisoners waiting for dispensation.  She remained at Camp Parole until the facility closed, and then returned to Washington.
Photo of Barracks at Camp Parole
Being held at the Camp really was not too bad.  Soldiers received medical care, ample food, new clothing and visits to the town.  Sgt Barbar, of the 15th Illinois Infantry Regiment, recorded after arriving at Annapolis,

Arose early, after a good night’s rest. Ate breakfast and then marched to the parole camp, three miles south of the city. It was a splendid camp, well and tastefully arranged, alid out in regular streets, excellent barracks, warm and well ventilated, with cook houses, etc…Passed my first night in a parole camp and it proved pleasant and agreeable. Arose early, answered to roll-call and then took breakfast, which consisted of soft bread, boiled bacon or beef and coffee. For dinner, we had bread and bean soup. The sanitary commission has been busy all day distributing needful articles amongst the prisoners, such as thread, paper, envelopes, combs, etc. A large sutler’s stand is also on the ground. A large washhouse nearby which contains fifty tubs and other accommodations for washing clothes. The whole camp presents a neat and wholesome appearance, the streets being wide and kept perfectly clean.

In August 1864, Grant suspended paroles and exchanges, leading some men to despair such as  Francis Reed, a parolee from Pennsylvania who wrote,

We arrived here yesterday morning, we heard the exchanging has been stoped[sic].  We are all very anxious to be exchanged to go back and square accounts with some of the rebels in the vicinity of Murfreesboro.  We are entirely out of money.  The rebels took all my clothes they did not leave me anything except what I had on, I have no change and I am pretty dirty.  If we do not get exchanged I shall try to get a furlough from here in a few weeks.  All are anxious to be exchanged, we have sent several petitions to Secretary Stanton asking to be exchanged, but no attention is paid to our petitions.  I have wrote to the Captain to go to General Commanding the Western Division to have us exchanged, but have received no answer yet.  I only wish we could get out of this place. Never have I been so discouraged as since being here. Everyone is dissatisfied all want to go home or be exchanged.  So there is continual growling, we are comfortabley [sic] quartered now, the boys will all have blankets and tomorrow they will all get a new suit from head to foot.

Oliver Ornsby of the 149th NY could hardly disagree.  He wrote his parents,

We have got a new Colonel to command the camp here. He has put a guard around the camp and lets no one go out of camp without a pass from him.  The men have been allowed to go out of camp when they liked, but as our new Col. Wants to show some authority I suppose we will have to stay around HOME as we call it, for the soldiers call every place home where they must leave their blankets overnight.

Photo of a Prisoner of War Record
Camp Parole continued to accept paroled soldiers up to May of 1865.  The Army abandoned the post and eventually  tore down all the buildings, the wood reused to build housing for freedmen in the area.  According to military records, the army processed around 70,000 soldiers through Camp Parole.  Although the location received recognition as a National Historic Site, Anne Arundel County decided to develop the land in 1994 and it now contains a shopping center and apartment building. 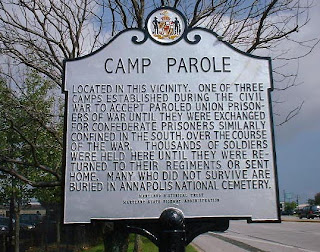 Sign marking the site
Anecdotally, although Dorence Atwater, who had a copy of the deaths at Andersonville, processed through Camp Parole, he did not meet Clara Barton there.  He contacted her after seeing her plea for information in a newspaper in June 1865.
Work cited:  Roblyer, Michael R. “The Civil War In Annapolis, Part VII: Union Soldiers at Camp Parole”. Anne Arundel County History Notes, April 2006, pp. 3-4, 13.
The National Cemetery in Annapolis
James Donelson (grave in center) died while Barton was at Parole
Posted in: Uncategorized