Clara Barton couldn’t have made the impact she did without friends. Her friends supported her, motivated her and (constructively) criticized her. One man who made an indelible difference in her life was the Honorable Henry Wilson. It is not clear when they became friends, but by the end of the Civil War they were very close, and some in the Barton family claimed that they were planning to marry when Wilson died suddenly in 1875. I’d like to relay some things about Wilson that most Americans do not seem to know. 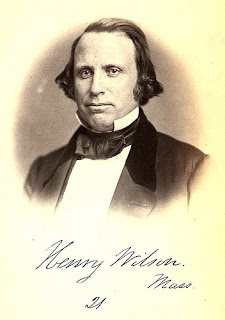 Henry Wilson as Senator from Massachusetts

Henry Wilson was born Jeremiah Jones Colbath in Farmington, N.H., February 16, 1812. In 1833 he moved to Natick, MA and learned shoemaking. While living in Natick he also occasionally worked as a teacher. Wilson served in the state legislature from 1841-1852. He was elected U.S. Senator in 1855 where he served until 1873, when elected Vice-President of the United States on the Republican ticket with Ulysses S. Grant. While in the Senate, he served as chairman of the Committee on Military Affairs and the Militia.

Wilson recruited a regiment of volunteers at Boston in 1861 including sharpshooters and artillery (the 3rd Battery Massachusetts Light Artillery and the 2nd Company Massachusetts Sharpshooters) that became the 22nd MA Regiment, and was elected commander (Colonel), but he resigned and returned to the Senate in late October 1861. The Regiment fought creditably as part of the Army of the Potomac throughout the War. Five companies came from outside Boston, including Barton’s former friends and students from the 6th Mass militia who were involved in the Baltimore Riots. These company’s enlistments for 90 days had expired. The 22nd Regiment required a three year committment. Friends such as Barton kept Wilson abreast of conditions in the field, making him a well-informed member of Congress.

Barton felt close enough to Wilson to express her deepest concerns and disappointments, a thing women did not do outside of their family during her time. His responses, including a trip to her boarding room late in the evening while she struggled with depression reveals the depth of their relationship. He adopted her as a sister when her brother died. During one episode she wrote him,

I know how worthless a woman’s life is, and what a pity it is to wear one, — few persons ever felt this more keenly or bitterly than I, few more ready than I for years to resign the useless bauble. I have striven (against the fearful odds) to make my life worth something to mankind, but realize that it has been, and must be, a failure.

Wilson was able to provide significant support to Barton during her quest to break barriers to serve the wounded. He put forward and received a commission for her brother David as a captain in the quartermaster department during the war in order to give her a way to serve at the front. As Chairman of the Military Affairs committee he ordered, on her request, an inspection of buildings left vacant but available to house the wounded in Fredericksburg, significantly improving care in that city during the Overland Campaign of 1864. 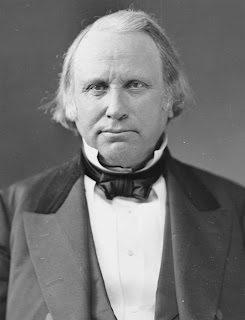 Henry Wilson as Vice-President of the United States

Wilson embodied the spirit of the American man of the 19th century. He and Barton had several things in common besides Massachusetts that drew them together. He was a self-made man as she was a woman, they both shared liberal values and had faith in the Republican party. If there ever was a man who was worthy as a husband to Barton, he would have been the most likely to embody those qualities. The family insistence that they were to marry in 1875 is not a far-fetched idea at all. Henry Wilson was quite an impressive man in 1865, as he would be today.

Expect to find Wilson’s name often here in the writings, he was an intrical part of Barton’s work and a friend she could always count on. America was lucky to have him in the worst crisis the young nation ever faced.