Ahead of Her Time?

One would think Clara Barton was a staunch liberal in her day.  Fremont was her man in politics, she admitted wholeheartedly believing in the policies of the Republican Party, all before Lincoln won election in 1860. Certainly, her views about helping others seem to cement her on what we would consider the left politically.  She just had a rather conservative view about charity.  In a letter from Europe in 1871, Barton outlined her work in Europe assisting refugees in war-torn France (she sided with the Germans, by the way).  She stated,

At first we could only give indiscriminately to the hundreds who thronged our doors.  But, directly, I perceived that a prolonged continuance of this system would be productive of greater disaster to the moral condition of the people than the bombardment had been to their physical; that in a city, comprising less than eighty thousand inhabitants, there would shortly be twenty thousand confirmed beggars. Only a small proportion of these families had been accustomed to receive charity, but one winter of common beggary would reduce the larger part to a state of careless degradation from which they would scarcely again emerge.  It seemed morally indispensable that remunerative [paid] employment in some form should be given them.

She made great success with her plan to organize employment for refugees and skill development for future employment. The plan was simple; the refugees needed clothing, work and job skills, so Barton decided to have them make garments, learning to sew on the job, and providing clothing for the community.  The plan revitalized the textile industry and benefited the long-term recovery of the region.  Later on in her life, she was quoted as describing her work as “a hand-up, not a hand-out.” 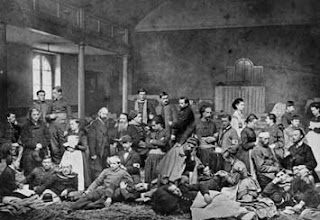 Franco-Prussian War Refugees
Courtesy of www.nobelprize.org
She went on during her time in Europe to become close friends of the Grand Duke and Duchess of Baden, and explained to them and other European leaders how she was spending their money to assist the French after war had left its horrible wake in their neighborhood.  Barton did not just visit and assess the challenges facing these people, she advocated for them to the leaders who would be responsible for their recovery.  To the victors of the war she wrote, 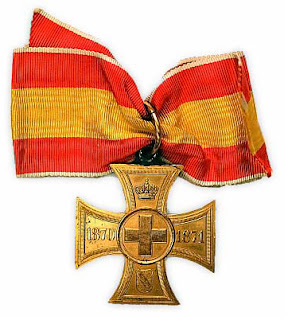 Medal received from Princess Louise of Baden
Courtesy of the Clara Barton National Historic Site
This population must always be the neighbors, if not a part, of the German people; it will be most desirable that they should be also friends; they are in distress—their hearts can never be better reached than now; the little seed sown to-day may have in it the germs of future peace or war.
Although many of Barton’s ideas such as civil rights and humanitarianism were pioneering, her ideas about charity do reflect that she was a woman of her time.  In 19th century America, industry impressed good citizens, and a dependence on charity showed lack of moral character.  Nothing showed good character more than independence and making positive contributions to society.   Today’s society does not seem so interested in moral character, but should that make Barton “old-fashioned” or out of touch with public need?  Studying psychology taught me that basic human needs never change, but the human mind is a very complicated thing, a product of our value system and life experiences.  I wonder how much we have really changed since Barton’s time.  Does she remain ahead of her time or have we passed her in social evolution? 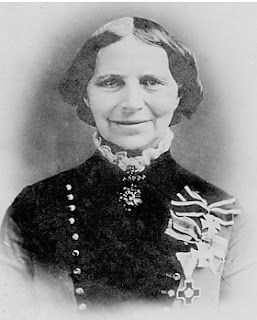 Clara Barton wearing pansy brooch and medals received for service.
The brooch was one of many gifts from Princess Louise of Baden.
Courtesy of Clara Barton National Historic Site
Posted in: Uncategorized