A Lady to her Fingertips

Clara Barton has had many biographies written to remember her life, but in my opinion, the best is Clara Barton: Founder of the American Red Cross, by Barton’s Cousin Rev. William E. Barton, an accomplished author.  Rev. Barton wrote this biography, using a great deal of material quoted of Miss Barton’s, after her realized Miss Barton’s authorized biography, Percy Epler, did not have access to much of her many written documents, correspondence, and speech and book manuscripts, and so the whole story did not unfold in his book.  The biography Rev. Barton wrote is almost a transcription of many of those documents accompanied with explanation and remarks about Miss Barton, who as a family member, he had spent a great deal of time visiting and conversing about “old-time” (as Miss Barton would say) memories.  The amount of quotations makes the book seem almost more like the autobiography Miss Barton never wrote, as her ever-busy schedule kept her from it. Many of the remarks found in the book from family and friends remembering Barton gives one a familial feeling as one receives sitting on the lap of an older relative listening to stories like Miss Barton did while her father recounted his experiences in the Federal-era Indian Wars that inspired her.
Rev. Barton wrote special sections at the end of his two-volume work further describing this extraordinary woman and enabling us to learn from her experiences to our benefit.  First, one will find several physical descriptions of Miss Barton, including one she wrote to a friend.  Next, some of the characteristics that helped her persevere through the trials and triumphs of her long life.  This week I will include physical remarks. Rev. Barton wrote,
At the beginning of her public career, Clara Barton was short of stature and slender as she was short.  Her form rounded out in middle life, but she never exhibited any approach to stoutness.  She was so well proportioned as to give the impression of being taller than she was.  When she spoke in public, if she stood beside a presiding officer, it was seen that she was small of stature, but when she stood alone, she gave the impression of being, and was often described as being, above medium height.  Her maximum height, attained in adolescence, was five feet two inches in moderately high-heeled shoes.  The author measured her in her later years, and she was exactly five feet tall without her shoes.
Her carriage was erect, except for a slight stoop in the shoulders.  There never came any sag in her person, any letting down of her erect standing.  Her spine below the shoulders was carried to the end of her life as erect as in youth.  As she stood or sat, she never had the bearing of an old person.  When seated, she commonly kept her back well away from the back of the chair, depending upon nothing external to assist her in maintaining her erect bearing.
She walked quietly, deliberately, and flat-footedly.  She put her whole foot down at once.  There was a certain firmness in her gait which indicated strength of character and resolute purpose.  She did not dart or rush or drift or flutter; she walked, and her walk was of moderate speed and of marked decision.
Her hair was brown and in her younger days she had great wealth of it.  She took good care of it; and, while there was less of it in her later years, it retained its fine texture, its soft silky wave, and its rich brown color.  The writer asked her once if she had a single gray hair.  She replied that she thought she had one, but had forgotten just where it was.
Her eyes were brown, and in some lights appeared black.  I find at least one description of her as she appeared on the lecture platform in which she was described as tall, with hair and eyes black as the raven’s wing.  The reporter is not to be blamed for his departure from truth.  She looked tall when she stood alone, and her eyes and hair appeared as he described them, when seen in some lights.
Her features were regular.  Her nose was prominent and strait.  Her mouth was large and very expressive.  Her features were remarkably mobile.  Her forehead was both high and wide, and in her middle life she wore her hair so that its full breadth and height appeared beneath the graceful parting of the hair.  In her later years her hair was combed down over the temples on either side, and remained parted in the middle.  Her chin was a very firm chin.  It did not protrude, neither did it recede.  There was not the slightest suggestion of a lantern-jaw; but there was a clear-cut prominence of the chin that suggested a firm decision and a tenacious purpose.
Her cousin’s generous description of Miss Barton probably would have embarrassed her.  She thought of herself as plain and practical.  To a friend she wrote,
I was never what the world calls even “good-looking,” leaving out of the case all such terms as “handsome,” and “pretty.”  My features were strong and square, cheek-bones high, mouth large, complexion dark; my best feature was perhaps a luxuriant growth of glossy dark hair shading to blackness…I never cared for dress, and have no accomplishments, so you will find me plain and prosy in both representation and reality if ever you should chance to meet either. 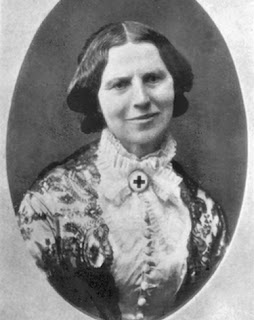 Barton 1878
Next week, descriptions of Barton’s personality, from several perspectives.
Posted in: Uncategorized