A Lady to her Fingertips Part II

My apologies for the tardiness of this week’s post.  A recent discussion with my friend Mike Hoffman regarding Barton’s principles of humanitarian service distracted me!  I will write about that later.  Now, where were we….oh yes, physical descriptions of Clara Barton, Angel of the Battlefield.
As in my last post, William Barton figures heavily with his impression. He wrote,
“…there was a clear-cut prominence of the chin that suggested a firm decision and a tenacious purpose.  She said to the writer, ‘Every true Barton knows how to possess an open mind and teachable disposition with a firmness that can be obstinate if necessary, and no one can be more obstinate than a Barton.’…She did not stare, but she had a habit of fixing her eyes upon an object or a persona which did not put arrogance or pretense at ease…ordinarily her look into one’s face was gentle and companionable and sympathetic.
…She had an almost mobid shrinking from the infliction of pain, or from the taking of life.  She was not strictly a vegetarian.  If she was at another’s table and meat was offered her, she ate it sparingly.
…From her father…[she] inherited a spirit of broad philanthropy and wide human interest.  From her mother she inherited a warm heart and a very hot temper.  It was this temper that gave her self-control.  She kept it perfectly under her bidding, and that lowered voice was the sign of mighty resolution and smouldering passion under the control of a conquering will.
Barton at the end of the Civil War
Courtesy of the Library of Congress
[She]…was a lifelong believer in woman’s suffrage.  She was a close friend and warm admirer of Susan B. Anthony, and shared her aims and hopes for her sex.  She was never as militant an advocate of the rights of women as Miss Anthony was, however.  Temperamentally she was of quite another disposition.
…Much as she prized any kind of useful knowledge, she especially admired the spirit of the pioneer, and honored the man who blazed new paths and widened the horizons of learning….
While extremely modest, Clara Barton was far from being a prude.  She was never terrified by appeals to respectability, nor could she be frightened by any warning concerning men or women whom gossip condemned.
…Clara Barton worked slowly.  While she formed her decisions promptly in emergencies, she formulated them carefully and with painful precision.  It was not by doing things easily she accomplished so much, but by rising early and working late and keeping constantly at the thing she wanted to do…
She coveted the ability to work more rapidly.  She admired that ability, and perhaps overvalued it, in others.
Clara Barton was a self-willed woman…All the women who went to the battle-front and were worth their carfare were women of strong will….Clara Barton was a lady to her very fingertips; and she had had enough of experience in Washington among officials and men of influence so that she knew how on occasion to be much more diplomatic and gracious than most other women with her responsibilities.  Moreover, she shrank from giving pain, and was careful of her words.  But she had as strong a will as Florence Nightingale, and, while she was as a rule more amiable than that lady in her more violent moods, she got things done.  People sometimes found her arbitrary, impatient, and obstinate; had she been less so, it had gone hard with the interests which she cherished.  She was capable of being arbitrary, impatient, and obstinate, and the same is true of each of the other women whom her name calls to mind.  But among them she was not the least gentle, considerate, and self-forgetful.  She required that things should move, and move in the direction of her decision; but she was at heart, and on most occasions in her demeanor, quiet, gentle, affectionate, and calm…
Courtesy of the Universalist-Herald
One time a friend of hers recalled to her a peculiarly cruel thing that had been done to her some years previous, and Clara Barton did not seem to understand what she was talking about. ‘Don’t you remember the wrong that was done you?’ she was asked.  Thoughtfully and calmly she answered, ‘No; I distinctly remember forgetting that.’…Only baseness and treachery and betrayal of trust won her scorn…
She was modest in her dress, but she  had an eye for bright colors…she inclined to green, which she loved to set off with red.  Red was her color, and she said, the Barton rose was the Red Rose, all the way from the War of the Roses down.  She loved red roses.  She loved red apples.  She liked to wear red ribbons and trimmings.  With a background of green, red was always safe…
Something must be said about her habit of economy, and it must be said with some care lest it give a very wrong impression.  Clara Barton was economical to a very marked degree…If a valid distinction may be made between two words that are nearly synonymous, she was parsimonious, but was not penurious.  She was raised in a community and in a family where want was unknown, but where money was earned by hard work, and capital was accumulated by thrift and economy.  It was part of her birthright and of her being.  There was about her nothing that inclined her to waste or even extravagance….She economized in things she did not greatly care for that she might do the things that were to her of supreme importance…
A strong individualist, she inspired in those who came to know her well that perfect confidence and grateful devotion which are the crowning test of leadership.
Clara Barton was a woman of tact.  She needed all the tact she had and more. 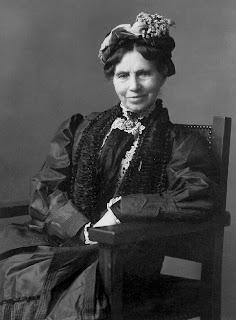 Courtesy of Clara Barton
National Historic Site
She had little love of music.  She did not sing or play any musical instrument.  When traveling abroad, if forced to attend the opera, she saved the time from utter waste by writing a home letter while singers of world-wide repute performed and sang before her.
…If Clara Barton did not care for music, she did dearly love poetry.
…No quality in Clara Barton was more marked than the breadth of her sympathies.  She shuddered at the thought of needless pain…She did not merely sympathize with suffering; she suffered…Her sympathies were so strong that she would have been useless in the presence of danger and pain but for her remarkable self-control.  I asked her once how she acquired this, and she said it was simply by forgetting herself.  She saw something that needed to be done, and went about the doing of it so promptly, so completely absorbed by the necessity of it, that she forgot to be horrified by the sight of blood, forgot to faint as timid females were supposed to do.  Days and weeks and months and years of it she would endure and never once give way…Again and again she held herself in hand through nervous strain that would have crushed most women or men, and when it was all over went nervously to pieces.” 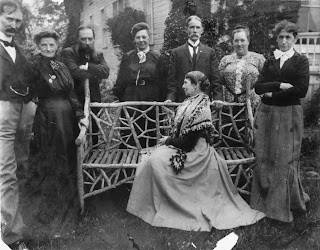 Courtesy of JHU Press
My favorite description of Barton comes from her neighbor at the Shaw Settlement, Mr. Horatio Taft, Esq., who rented a boarding room (most likely #7 since he describes it as a room with windows in the front).  He wrote in his diary while staying there in the spring of 1865 of Miss Barton,

Some females rode in the Review yesterday and today who I was told had been “through the War.” Some officers and soldiers wives and some “Daughters of the Regiment,” who had followed their Brothers or Fathers or husbands, and shared their dangers, taking care of the wounded, and nursing the sick. One of this Class I am acquainted with, but she left the Army of the Potomac some three months ago, Miss Clara Barton of Worcester Mass. She has been known and called the “Angel of the Battlefield.” She was inFredericksburgh during the terrible “Burnside Battle” there having crossed the River on the Pontoon Bridge while the Rebels were shelling it. She was there again last summer when the City was filled with our wounded from the Battle fields of the “Wilderness.” She afterwards went with the Army to Petersburgh and administered to the wounded in the field Hospitals being frequently under fire in carrying relief to the Wounded on the field. I am told that she seemed on such occasions totally insensible to danger. She is highly educated and refined, and few ladies ar[e] asinteligent as She is.

The name of my blog is actually taken from an assessment of Barton about herself.  She said that she was not a woman with more than any ordinary courage.  I beg to differ!  Barton was a woman of extraordinary courage and true to the spirit of her day, strong enough to maintain and promote her beliefs in order to make her fellow man’s life better, especially those in need.  What a world it would be if more citizens prescribed to the values Barton held dear.
Posted in: Uncategorized